The comings and goings

Since I've returned to work the past month has flown by. I can't believe it's Thanksgiving next week. Here's a few things that have been going on in the Suzuki house.

We've moved in to the new apartment. Unpacking sucks. The kitchen is almost fully unpacked. A month of no home cooked meals is awful. Even microwave chicken pot pies felt like a treat.
Slowly but surely we'll get there.

We celebrated Halloween, no trick-or-treaters but we still bought Candy. Dressed up the baby

He was only mildly amused that we were so amused.

We went to visit some great aunts of mine after Halloween. That was a lot of fun. I think Breckin had a good time. We got to take a look at some of my great uncle's drawings. He did them all free hand. Like this cute one here: 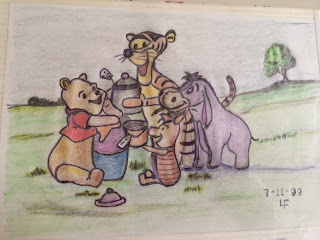 Other than that it's been business as usual around here. Breckin's 4 month appt. showed he was a little on the small side but nothing to be concerned about. He's just a very active baby. He got some shots and that was sad but also very cute because when he cries it's just adorable.

We're starting to gear up for the holidays. I'm super excited for this year. Even though Breckin won't know what's going on. :) Hopefully he'll enjoy it. Because how do you not want to see this kid smile. 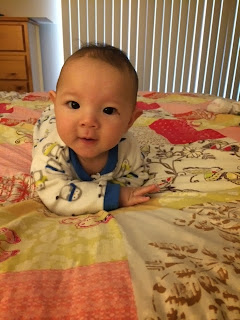