There have been several changes in the Suzuki household as of late. For instance Joe and I are both currently unemployed. Before you start sending money, it was planned.Well wait, on second thought. Send money anyway! Lots of it.

I have another job lined up and start in early Feb. It's very exciting and scary. After working at my job for 13 years it took a lot of coaxing and reassurance from a couple different parties to convince me that the move was a good idea and that i was a good fit for the position.

It's funny, how I second guess myself. I feel not good enough. After working at my job for so long I still feel unqualified. Unsure. Why is that? Is that an inherent trait in women. The women's conference I go to every year seems to believe so. That we as women tend to look at our accomplishments and say "oh, it was the team" or "yeah, but that was all of us". Where as a man will look at their accomplishments and say "yep, all me".

I'm trying to get better at this. I'm trying to think about what I've done. What I've accomplished. I keep telling myself that I'm good enough and smart enough and gosh darn it people like me.

I guess it's a slow process. The believing. But I'll keep talking to myself and eventually I'll get there.

As far as Mr. Suzuki. He's living the life of luxury for awhile and weighing his options. Because you know. He's awesome. :)

I'm exited for all the changes around here and know that this turning point is for the better. I'll keep you posted on how it all turns out!

Mac and Cheese - not just a tv show

Yes, folks. That was a Friends reference. Who doesn't love Friends?

My good friend Shauna gave me a cookbook for Christmas. It's put out by this restaurant in Oakland called HomeRoom that we really want to try. Well last night Joe decided to try a recipe and holy moly. It was soo good. 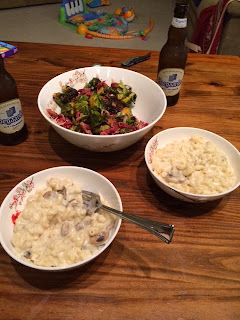 Joe better watch out. A girl could get used to this.

This chick is ridiculously talented