Can it already be the middle of March? Time really flies as you get older. Totally how I feel right now:

He discovered his tongue!

Breckin has been in school for 6 months. He seems to really love it. Even though he’s exhausted afterward.

He’s come home with one piece of artwork a month usually including a paint print of his foot.
It's really cute and has stopped making me cry...don't ask..I just love his little hands and feet.

Breckin has grown quite adept with his walker. He’s learned how to turn it and now tries to take it up and down stairs and over objects. Which in turn causes my blood pressure to jump.
His therapist recently showed us how to unlock the wheels. Which makes Breckin go around in a circle when is tired. But will be great for him once he's figured out how to to use it. It will give him greater control and allow him navigate tight spaces easily. Also, hopefully it will force him to use more of his own muscles and get him to start trusting himself to walk independently.  Which would be great for us too since he's getting tall and heavy.

Breck still isn't talking. He's making sounds and is showing greater range of emotions. Squealing when happy and really hamming it up when he's sad or in trouble. It's pretty cute.  As seen here. 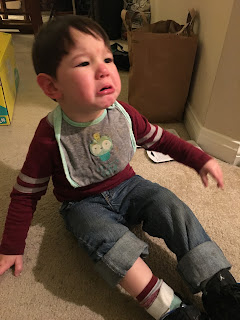 Hopefully he'll catch on to some words soon. I really want to hear him say mama.